New Mexicans for Science and Reason

NEWS OF THE MONTH

November 11th, 2020 NMSR Meeting: Nicholas Lamar Soutter on the Election, the Future of Science, and More!
Video of the Presentation

September 9th, 2020 NMSR Meeting: Cynthia Hall on "The PRC and Climate Change: What's Taking So Long?"
Video of the Presentation

August 12th, 2020 NMSR Meeting: Tom Solomon on "A Sustainable Economy Without Fracking"
Video of the Presentation
Zoom Chat, lots of links to resources!

May 13th, 2020 NMSR Meeting: Holly Olivarez on "The connection between Climate Change & COVID-19"

As a scientist at CU Boulder, Holly studies the ocean and climate change; specifically, the absorption of carbon dioxide (CO2) by the ocean. To learn more about the speaker and this event, visit ClimateChangeTalks.com.

PDF of the Presentation

Video of the Presentation

Read the Web summary, which has additional images not included in the newletter!

Watch the Entire presentation and Followup on NMSR's YouTube Channel!

In addition to the Washington D.C. event, science marches are scheduled all over the country, and all over the world. Here in New Mexico, marches have been organized by groups in Albuquerque, Santa Fe, Socorro and Las Cruces. At NMSR's April 12th meeting, representatives from some (we hope all) of these groups will describe what their cities are planning for Earth Day, to follow ten days later (April 22nd,2017). Mark your calendars!

DAVE THOMAS TO SPEAK AT CSICON 2016

Dave Thomas is presenting a talk at this year’s CSICON 2016 meeting, in Las Vegas, NV. His topic is “War of the Weasels: An Update on Creationist Attacks on Genetic Algorithms,” and will be given in the Sunday morning session, October 30th, 2016.

Abstract: Since Genetic Algorithms (GAs) are a class of computer programs that use evolutionary principles to “evolve” answers to difficult problems in math, physics, engineering and biology, they are a prime target of creationists of all varieties. This talk will trace the evolution of creationist attacks on GAs, from saying that they all need the final answers fed to them at every step (like Dawkins' Weasel experiment), to claiming that "active information" is being secretly introduced into GAs, and finally to the preposterous definition of "Specified Complexity," the claim that examples of evolving complexity don't even count unless they meet the absurd criterion of being as uncommon as tossing a fair coin heads up 500 times in a row. The game is rigged from the very start: evolution can never win under the rules adopted by "Intelligent Design".

Is Arkencounter the Largest Timber-frame Structure in the US? Nope! 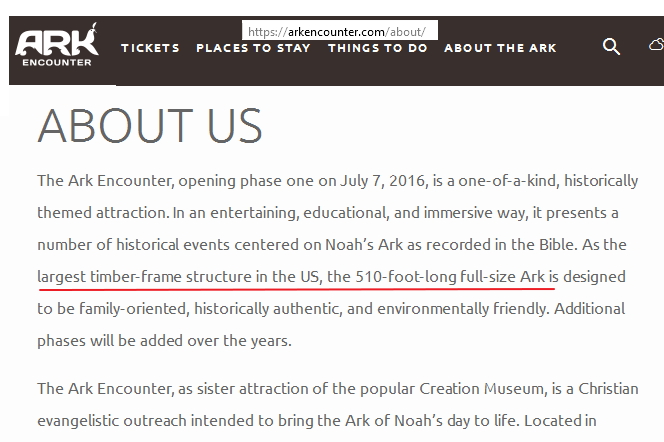 Ken Ham calls his 510-foot-long "full-size Ark" "the largest timber-frame structure in the US."

Well, that claim is just plain false. We New Mexicans get the chance to see an even larger timber-framed structure, visible from aircraft close to the Albuquerque International Airport.That 600-foot-long-plus structure is called ATLAS-I, also known as the TRESTLE. It is made entirely of wood - even the bolts are wooden or dielectric. It was using for EMP testing back in the day. In this animation (thanks, Python!), the TRESTLE appears in white, and the Ark (to scale) in green. 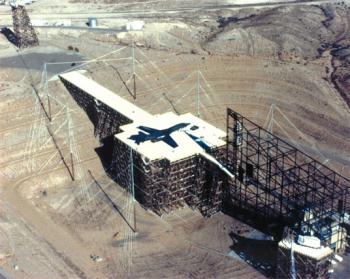 Read the full story at the Panda's Thumb, with many additional pix, and Comments!
http://pandasthumb.org/archives/2016/07/is-arkencounter.html

Rush Limbaugh: “Why are there still apes?”

Comments and more at the Panda's Thumb:http://pandasthumb.org/archives/2016/06/rush-limbaugh-w.html

William Dembski on his “Disillusion with Fundamentalism”

I would still regard myself as an inerrantist, but an inerrancy in what the Bible actually teaches, not an inerrancy in what a reflexive literalism would demand of the Bible. Have I, as Bottaro suggests, left myself open to recanting the recantation? I have. Without the threat of losing my job, I see Noah’s flood as a story with a theological purpose based on the historical occurrence of a local flood in the ancient Near East.

708 Comments and counting, at the Panda's Thumb: http://pandasthumb.org/archives/2016/06/dembski-on-his.html

We STILL Don't Need No Stinkin' Target: 10 Years On, the War of the Weasels is Back!
On Panda's Thumb, the Blog
http://pandasthumb.org/archives/2016/01/target-target-w.html

The evolution of antievolution policies after Kitzmiller v. Dover, New Mexico Version
Nick Matzke published an amazing evolutionary analysis of creationist legislation over the last 10 years in Science, and NM's bills were right in there!
http://www.nmsr.org/matzkestudy.htm

We STILL Don't Need No Stinkin' Target: 10 Years On, the War of the Weasels is Back!
Why Dembski et. al.'s attack on Dave Thomas's Steiner Evolutionary Algorithm is Wrong:
http://www.nmsr.org/weaselsnew.htm

The Founding of NMSR : A Look Back after 25 Years

New Mexicans for Science and Reason has been proudly on its own for 25 years. But it had its origin in a national and even international movement to help spread science-based skepticism around the country and the world.

Can't find the story you were looking for??